Do you know all the seven wonders of the world? Neither do we. So we made a list of them and gathered the most important facts based on Abbreviationfinder. Between the 300s and 100s BC, the Greek empire spread over a large part of the eastern Mediterranean and the Middle East. The Greeks who had the privilege of traveling thus gained access to foreign civilizations and their architecture. To help the travelers, several travel guides and poems were written that contained lists of sights not to be missed. One of the poems was written by the poet Antipatros from Sidon in the 100s BC. The short poem mentions seven buildings, and his list is seen as the original of what is today called “the seven wonders of the world” or “the seven wonders of antiquity”. Admittedly, Antipatro’s list contained the walls of Babylon, which in later lists have been replaced by the more significant lighthouse on Faros. Here are the seven wonders, arranged according to how cool we think they are. According to Countryaah, the seven ancient wonders will not be confused with the world’s seven new wonders designated in 2007.

Of the seven wonders of antiquity, the hanging gardens of Babylon are the only wonders that may not have existed. The gardens are described in different ways in different works, and no author himself seems to have witnessed them. They are said to have been located somewhere in the city of Babylon, in present-day Iraq, but no archaeological traces of them have been found.

Babylon’s hanging gardens are said to have been built by King Nebuchadnezzar II, regent of Babylon between 605 and 562 BC, as a gift to his wife. The plants would not have hung, but planted on terraces and roofs. One of the most fascinating things about the gardens, if they existed, is how the irrigation would have taken place in the arid area. The picture shows an artist’s idea of ​​what the gardens might have looked like, based on stories.

6. Temple of Artemis in Ephesus, Turkey

The temple of Artemis in the ancient city of Ephesus, in present-day Turkey, was built to honor the Greek goddess of hunting, Artemis. The (probably) first version of the temple began to be built in the 560s BC, took 100 years to complete and became with its 115 m x 55 m the largest in antiquity. The temple was burned down in 356 BC. by a celebrity Greek named Herostratus, who wanted to make his name immortal (he also succeeded because he gave rise to the term “herostatic notoriety” – a celebrity achieved by doing something stupid or evil). Herostratus was executed. 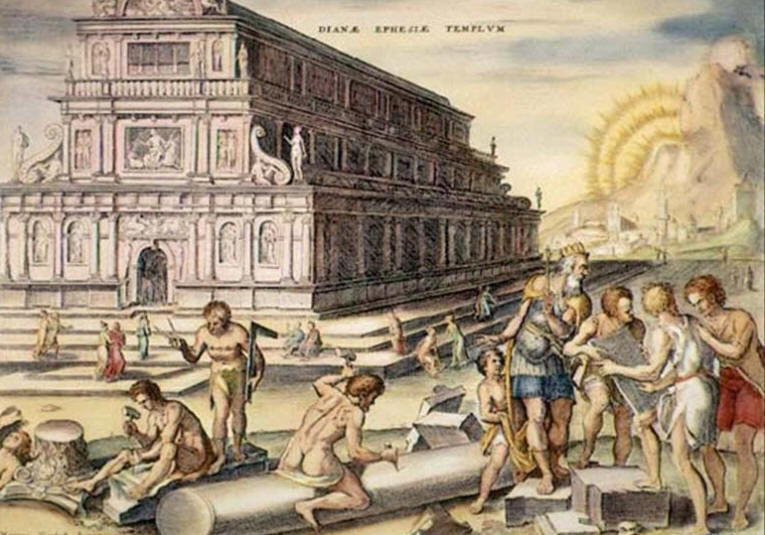 A new version of the temple was built which was even larger – 137 m long and 69 m wide. The temple has been looted since 268 AD. when the Goths invaded the area. In 1869, the remains of the temple were discovered, which consist only of the foundation and fragments. The picture shows an artist’s idea of ​​what the temple might have looked like, based on historical descriptions.

5. Statue of Zeus in Olympia, Greece

The statue of Zeus in Olympia was an approximately 13 m high sculpture depicting the king Zeus of the gods. The statue was created by the sculptor Fidias in the 430s BC and the place for it was obvious – in the Temple of Zeus in Greece’s most important sanctuary and festival site Olympia. You have a pretty good idea of ​​what the statue looked like thanks to detailed historical descriptions. It was made of wood, but Zeus was covered with plates of gold and ivory, while the throne he sat on was adorned with ornaments of gold, ivory, ebony and precious stones. No one knows the fate of the statue – it may have been destroyed when the Temple of Zeus burned down in 425 AD. 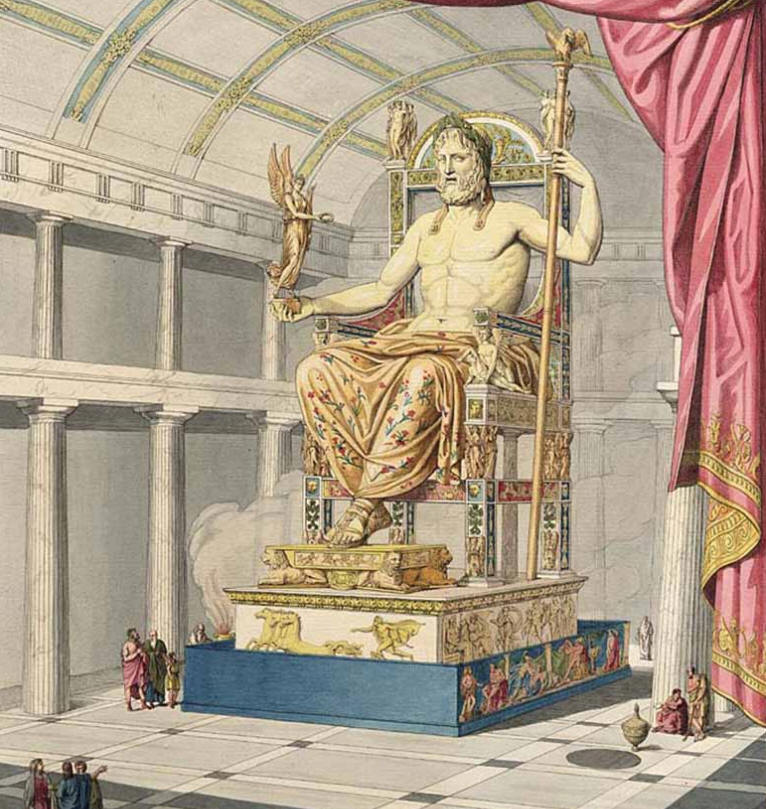 4. The Mausoleum of Halikarnassos, Turkey 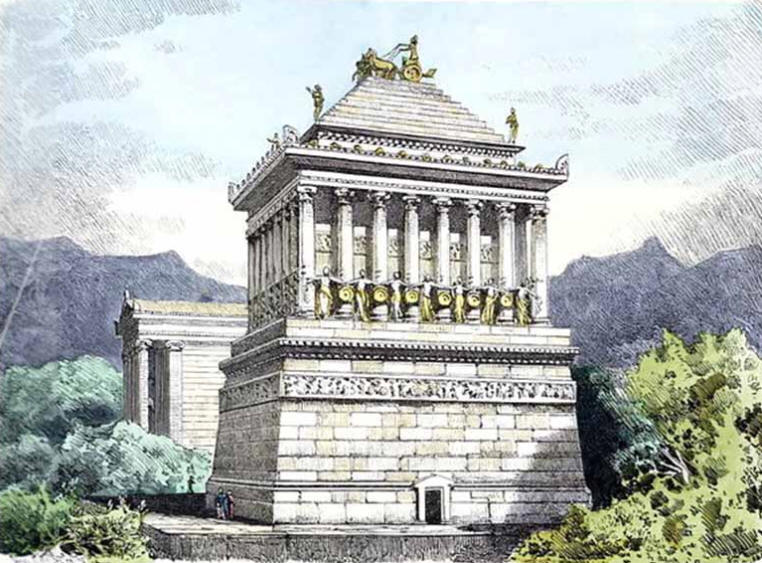 The tomb was built on a high platform of stone, which could be climbed with a staircase flanked by lion statues. Up on the platform stood the tomb itself, which was built of marble and surrounded by columns and scaffolding, and all extended a total of 45 m into the air. Most likely, the mausoleum was destroyed in an earthquake in the 13th or 14th century. [6]The picture above shows a painting of the mausoleum, based on descriptions.

The word mausoleum comes from this tomb and is now used for lavish tomb monuments.

3. The Colossus of Rhodes, Greece

The colossus of Rhodes was a huge statue depicting the sun god Helios. It was built to celebrate Rhodes’ victory over Macedonian general Antigonos I of Monophtalmos, who had attempted to conquer the city in 305 AD. His fleet left behind much equipment, which was sold for money used to build the iron and bronze-clad statue. The colossus was ready in 280 BC, after 12 years of construction. The statue was possibly placed at the entrance to the port of Rhodes, where it guarded the ships. The height was probably over 30 m. The statue collapsed in an earthquake in 226 BC, but the remains remained an attraction for several hundred years until they probably began to be removed to be used for other things. No remains have been found, and the image above is based on historical descriptions.

The colossus of Rhodes was the source of inspiration for the Statue of Liberty in New York.

2. The Pyramid of Cheops, Egypt

The Pyramid of Cheops, or Pyramid of Khufus, is located on the outskirts of Giza in Egypt and with its 137 m (initially 146.6 m) is the highest of the pyramids of Egypt. It is also the oldest of the seven wonders of antiquity, and the only wonder that remains today.

The Pyramid of Cheops is believed to have been built as a tomb to, and on the orders of, Pharaoh Cheops (Khufu), one of the kings of Egypt’s fourth dynasty that lasted between 2575 and 2465 BC.

Even today, it is a mystery how the pyramid was built and how the boulders were stacked on top of each other. Modern excavations, however, indicate that it was upwards of 10,000 paid workers who built the pyramid, and not slaves as previously thought. The large building blocks were pulled from a quarry less than a kilometer away, and at least in the lower third of the pyramid, they were lifted into place using ramps. How the stones were raised to the higher levels is a major question mark, but it was possible to lift the stones up each of the approximately 60 cm high steps on the outside of the Cheops Pyramid with sufficient manpower and levers. The steps of the pyramid were then covered with smooth limestone which was transported by boat on the Nile from the limestone quarry in Tura, about 13 km away (basically all the limestone has now fallen off).

1. The lighthouse at Faros, Egypt

Faros was an island (now a peninsula) just outside Alexandria, Egypt’s second largest city today. To prevent ships from sinking on the island’s cliffs, Egypt’s then-ruler Ptolemy I Soter ordered the construction of a giant lighthouse. The lighthouse began to be built sometime around the year 300 BC. and was ready after 12 years. 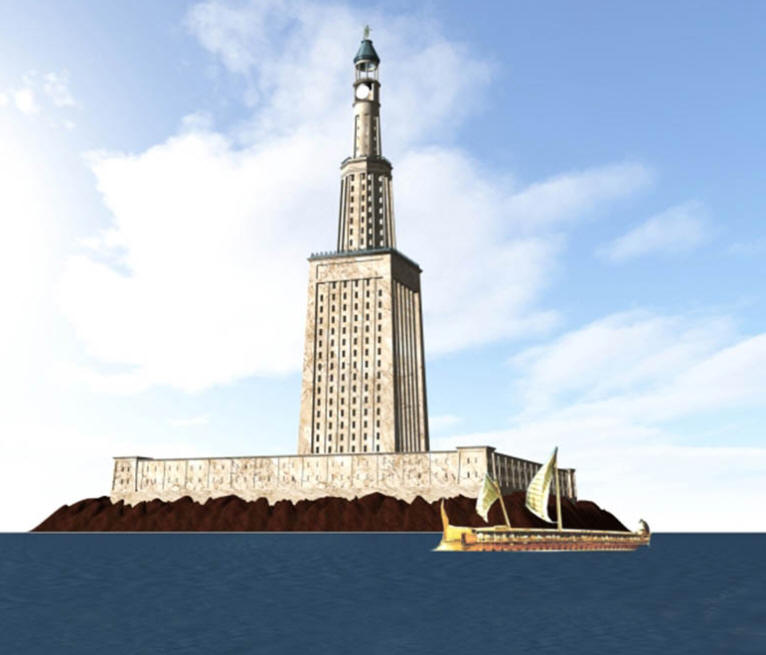 According to historical descriptions, the lighthouse was 100 to 120 m high and built in three sections, with the section at the bottom being square, the one in the middle octagonal, and the one at the top round. In order for seafarers to see the lighthouse in the distance, there was a large mirror at the top that reflected sunlight, and it was replaced at night by a burning fire.

The tower was very useful and was repaired several times, but after earthquakes in 1303 and 1323 the tower remained in ruins. The ruins remained until the 1480s, when some of them were used for a fort built on the same site. The lighthouse on the island of Faros is one of the earliest known lighthouses, and the name of the island has given rise to what lighthouse is called in several languages ​​- in Greek it is called lighthouse φάρος (pronounced “faros”), in French phare , and in Italian and Spanish faro.

The picture shows a model of the lighthouse which, based on the remains, should be quite accurate.

Asian Democracy and Rights by Country