This current of Romanesque architecture derived from the Carolingian tradition was destined to be preserved for a very long time in Poland, as evidenced for example by the collegiate church of Tum near Łęczyca, consecrated in 1161, which faithfully reproduces the layout and shapes of the second cathedral in Krakow. The variety of sources of inspiration that marked Romanesque art in Poland also manifested itself in other churches erected during the first phase of the spread of Christianity (10th-11th centuries). The rotundas with one or four apses – an architectural typology developed in Croatia, Great Moravia and Bohemia – served as churches for the suburbia, but also as palatine chapels (e.g. in Giecz, Przemyśl and the church of the Virgin in the citadel of Wawel in Krakow); some followed a more complex typology with a three-nave layout and crypt, such as the St. Gereon in the Wawel citadel in Krakow, which takes up a model from Saxony. The stylistic differences were further increased at the time of the disintegration of central power in 12 Century. The architecture in some principalities attests in this epoch defined regional characteristics, as in the case of the Great Poland and the Kuyavian, largely marked by the architecture of the monastic reform movement developed in the monasteries of southern Germany and Saxony. The activity of a group of Italian masters, who built the Cistercian monasteries of the Little Poland (Wa̢chock, Koprzywnica, Sulejów, Jędrzejów) and started other construction sites in this region in the first half of the century. 13th, was at origin of another regional artistic current, characterized by an architecture that continued the Burgundian Cistercian style in its Italian version, but which was also marked by some Gothic innovations (ogival cross vaults). Also architectural sculpture, still marginal in the buildings of the century 11 ° and became an element of growing importance in the constructions of the following century, it experienced a strong diversification in this phase. Several workshops of Italian origin worked in Silesia (in Breslau) and in Masovia (in the convent of the Regular Canons in Czerwińsk), where they contributed to the creation of stylistically composite works, such as the portal of the collegiate church of Tum. A workshop perhaps of Saxon origin he built at the end of the century. 12 ° the unusual decoration of the church of the Premonstratensian nuns of Strzelno, dedicated to the Trinity, where columns decorated with reliefs depicting the Virtues and the Vices appear; also a group of tympanums decorated with figures of donors and endowed with inscriptions testifies to the search for new iconographic formulas (Breslau, Strzelno). known. On the other hand, the illuminated manuscripts and Eucharistic vases from the abbey of Trzemeszno (Gniezno, treasury of the cathedral) and those from the city of Płock allow us to ascertain that Poland entertained in the 10th century. 12 ° important artistic relationships with relatively distant environments, such as the Meuse valley, Swabia and Bavaria. The economic and social transformations undergone by the region during the century. 13 ° radically changed the ways of artistic creation. The charters granted by the princes to the ancient urban agglomerations, now in a phase of strong growth, transformed them into legally autonomous cities and made them a powerful factor of economic development.

This movement was amplified starting from the middle of the century. 13th, while not denouncing the same rhythm everywhere: Silesia placed itself in a more advanced position, followed by the Great Poland and the Little Poland; but as a whole the lands of the Crown Kingdoms Poloniae saw their urban network enriched only under Casimir III and Ladislao II. The sites linked to the construction of cathedrals and abbeys, especially the Cistercian ones, continued their activity, but the center of gravity of artistic creation shifted more and more towards the cities. Given that these transformations took place at the time of the political division of the country and that the reunification of the kingdom took place over several decades, each region of the Poland kept its own specific cultural character and a strong diversification of the artistic landscape marked the country until to the gradual disappearance of the Gothic during the 16th century. One of the factors that determined this stylistic diversity was the influx of German populations into the Reformed cities, which was particularly important at the beginning of the urban transformations (ca. 1250-1350) and also contributed largely to the constitution of the upper social levels of the bourgeoisie. general line, the Gothic art of the various principalities of the century. 13 ° and of the reunified kingdom of the secc. 14 ° -15 ° can be divided into two large geographical areas: the South (Silesia, Little Poland and, later, the Russian lands of the Crown) and the North (Big Poland, Kuyavian, Masovia and the territories of the Center). In the architectural field, the fundamental differences are evident in the construction material: in the South, freestone associated with brick or, more rarely, used alone was favored; in the North, on the other hand, only brick was used. Differences are also found in the plants, structures and decoration of buildings. The Gothic was introduced in Polish territory, in particular in Silesia, in the second third of the century. 13 ° by the Cistercian construction sites, as shown by the abbey of Henryków, and by the architects of the Mendicant Orders who worked in numerous cities (Krakow, Breslau, Płock, Sieradz, Poznań). This architecture, closely linked to that of various regions of central Europe (Rhineland, Saxony, Thuringia, Moravia), left traces in the sober, sometimes severe forms of the first Gothic buildings in Poland. For the choir of the Cathedral of St. John the Baptist in Breslau (1244-1272) the plan of Cîteaux II was adopted, later taken up in the choir of the Cathedral of the Assumption and of St. Adalbert in Krakow (1320-1346), and the he Cistercian imprint also marks the choir of the cathedral of Gniezno (1342-1370). In the second quarter of the century. 14 ° two types of church specific to this region were born in Little Poland: the church with a wide single nave, in which the vaults are supported by one or more pillars placed on the axis of the building, and the large urban basilica with a deep choir, court aisles. 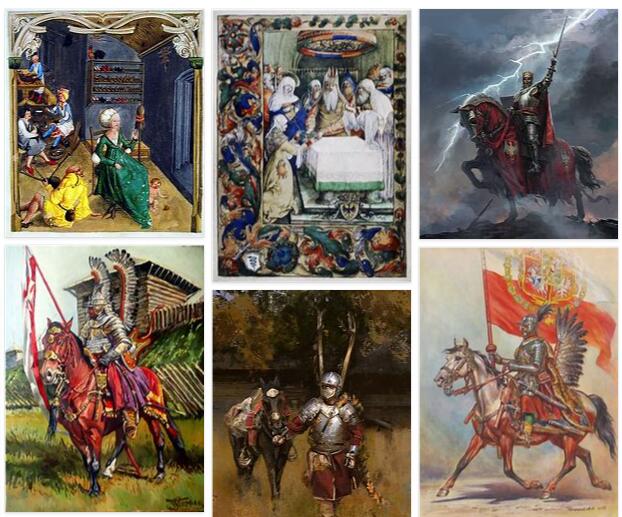