Pigeon Forge is on the edge of the most visited national park in the United States, the Great Smoky Mountains. The highest peaks of the rocky Appalachian Mountains tower up here.

Born on January 19, 1946 in nearby Sevierville, Dolly Parton remained connected to her homeland and family as a world star. With her Dollywood theme park , Dolly Parton brought jobs to the backward region of the Smoky Mountains in 1985, many of which she filled with family members.

Since then, Pigeon Forge has experienced an enormous upswing to become the most visited resort in Tennessee with many attractions, such as the replica of the Titanic on a 1: 2 scale, several dinner theaters with lots of country music and comedy, large show theaters and themed hotels such as the Margaritaville Island Hotel in Jimmy buffet style that can be found in the tourist district of The Island with its Caribbean flair. See allcitycodes for latest population of Pigeon Forge Tennessee.

The resort of Pigeon Forge is also famous for its large show theaters, many of which are Broadway-style, and for unusual attractions. The Wonderworks science museum was created in the form of an upside-down house. The Titanic continues this tradition of the extraordinary.

Titanic in the mountains

On April 8, 2010, the “ Titanic Pigeon Forge ” museum opened in the form of a giant replica of the luxury liner. The ship on rock was built in the resort of Pigeon Forge against the backdrop of the Great Smoky Mountains in more than a year and cost around 25 million dollars.

The half-size replica of the front half of the ocean liner shows finds from the real Titanic that floated on the water after its sinking in 1912, including deck chairs and life jackets.

The owner John Joslyn was submerged in 1987 with the second Titanic expedition by submarine to the wreck on the sea floor of the Atlantic Ocean. This experience never let go of him. He built his first Titanic in 2006 in Branson, Missouri. The younger museum Titanic in Pigeon Forge is just as big, but has more exhibition space and – as the only ocean liner in the mountains far from the sea – offers a particularly fascinating sight.

Pigeon Forge and Dolly Parton’s neighboring hometown Sevierville as well as nearby Gatlinburg with their many neon signs do not correspond at all to what Europeans commonly imagine a mountain town to be. Instead, you will find authentic America here – in a place where Americans go on vacation. There are many cheap hotels and, as an alternative, pretty log houses with a high level of comfort in quiet side valleys, which are offered as “chalets” or “cabins”, or in lodges. Those who like it very close to nature and quiet, live well in Townsend, the fourth place in the national park.

The AnaVista observation tower in the Anakeesta Mountain Theme Park in Gatlinburg offers a spectacular view of the Great Smoky Mountains National Park. With ziplines and treetop paths, experiences are possible there that cannot be found in the neighboring Great Smoky Mountains National Park because it is strictly protected. The tower marks the highest point in Gatlinburg, its shape is supposed to be reminiscent of an opening blossom. A chairlift cable car leads up the mountain.

The theme park also includes a stage for live music, a water play area for kids, a barbecue restaurant, and a craft beer brewery. The name “Anakeesta” comes from the Cherokee language and means “high country”. 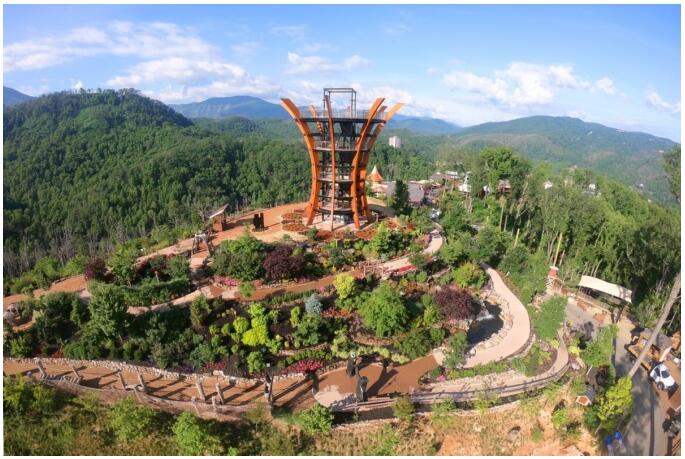