Abbreviated as MYS by Abbreviationfinder, Malaysia is a monarchy with parliamentary democracy, but significant differences compared to western democracies are mainly seen in the view on media freedom and the application of the judiciary. The courts are not completely independent and there are shortcomings in the freedom of the press and opinion.

The country generally has free party formation, but the Communist Party is banned. Freedom of assembly and gathering is limited. Human rights activists and opposition politicians have been indicted for participating in peaceful demonstrations. People have also been arrested for protesting against deforestation approved by local authorities.

LGBTQ people are discriminated against in the law as well as in society at large. It is criminal for men to have a same-sex sexual relationship.

Corruption is a serious problem, not least in politics. The so-called 1MDB scandal in May 2015 triggered a political crisis that led the National Front to surrender the government three years later after just over 60 years. At the center of the corruption revolution is then Prime Minister Najib Razak, who is charged with money laundering, abuse of power and corruption in connection with the disappearance of more than $ 5.5 billion from the state investment fund 1MDB (see further Current Policy and Calendar). In 2019, Transparency International placed Malaysia as the 51st of 180 countries in its index of corruption in the world (see the full list here).

Freedom of the press and opinion is enshrined in the constitution, but a number of laws severely limit the media’s discretion and also contribute to self-censorship among journalists. The laws allow the authorities to prohibit the printing, sale and distribution of newspapers and books that are considered to threaten public safety or which are deemed to be harmful to order and morality.

Reporters Without Borders reported in 2019 some bright spots in the media situation after the spring 2018 power shift (see Current Policy). Some investigative reporters and the media have been able to resume their work without being exposed to threats or harassment from the authorities. Self-censorship has diminished and various political views can be expressed in the media. The new government has scrapped a law from 2018 which meant that a person who spread “fake news” could be sentenced to up to six years in prison. However, most laws limiting media freedom remain.

Reporters Without Borders ranked 2020 Malaysia as 101st of 180 countries in its index of freedom of the press in the world (see full list here). It was an improvement with a total of 44 placements compared to 2018 when Malaysia ended up in 145th place.

The government has the right to demand that the media stop reporting or diminish the reporting of certain events. This is especially the case in relation to the relations between the country’s different ethnic and religious groups. A journalist can be sentenced to up to 20 years in prison for incitement.

Each newspaper must have a publishing permit that is valid for the time being but which can be withdrawn by the Ministry of the Interior, whose decision can however be appealed.

The use of the internet is widespread. Because the authorities want to make Malaysia a center for modern information technology, the internet is not covered by the censorship rules. But websites and blogs are still monitored by the authorities who have repeatedly arrested and condemned journalists and bloggers. They have been accused of insulting the king or Islam, which is not allowed.

The judiciary is similar to its British model, but civil law also applies Muslim inheritance and family law, so-called Sharia, to the country’s Muslims. For other ethnic and religious groups secular civil law applies .

The country’s sharia courts have been criticized by women’s organizations for discriminating against women in various ways. Among other things, a woman’s testimony does not weigh as heavily as a man’s and women’s disadvantages when it comes to divorce, custody disputes and inheritance law. In July 2010, for the first time, the government appointed female judges to two Sharia courts.

Penalty punishment occurs both in Sharia law and in secular civil law. It can be punished for about 60 different crimes, including murder, rape, drug crime and crime against immigration laws. The majority of those who receive impunity are paperless refugees. All women and men over the age of 50 are exempt from punishment. Children from ten years of age are punishable and boys from that age can also be sentenced to limited sentence.

Constitutional changes and government intervention since the late 1980s have reduced the independence of the judiciary. High ranking judges are appointed by the Sultans of the states on the recommendation of the Prime Minister. The judiciary is congested and ineffective, and corruption among judges is said to be common.

Police and prison guards are often accused of mistreating or raping arrested and imprisoned. Impunity is widespread. Few cases of police violence are investigated and even fewer lead to convictions.

The state of emergency introduced in Malaysia after the 1969 riots (see Modern History) has never been revoked. Following criticism from, among other things, the UN, security legislation was abolished in 2011, which among other things led to widespread and sometimes fatal violence against the arrested. But at the same time, street demonstrations were banned and the following year new security legislation was adopted, similar to the one abolished. Since 2013, the authorities can also keep people detained indefinitely without judicial review.

In the spring of 2019, the Mahathir government was criticized by HRW for failing to fulfill its promises of an improved human rights situation in the country. For example, the government has not abolished the law that allows a suspected person to be detained without time limit, or the disputed security legislation. The government has also backed away from a proposal to become a member of the ICC International Criminal Court.

In a report published in the fall of 2019, Amnesty International accuses Malaysian police of using torture to get suspects of crime to admit guilty during questioning. This also applies in cases where the suspect risks the death penalty. The organization writes that the trials against prosecutors who risk the death penalty are often unfair, as the defendants rarely lack defenders for long periods. Amnesty International estimated the number of sentenced prisoners in Malaysia’s prisons to nearly 1,300. Of these, 73 percent are convicted of drug offenses. 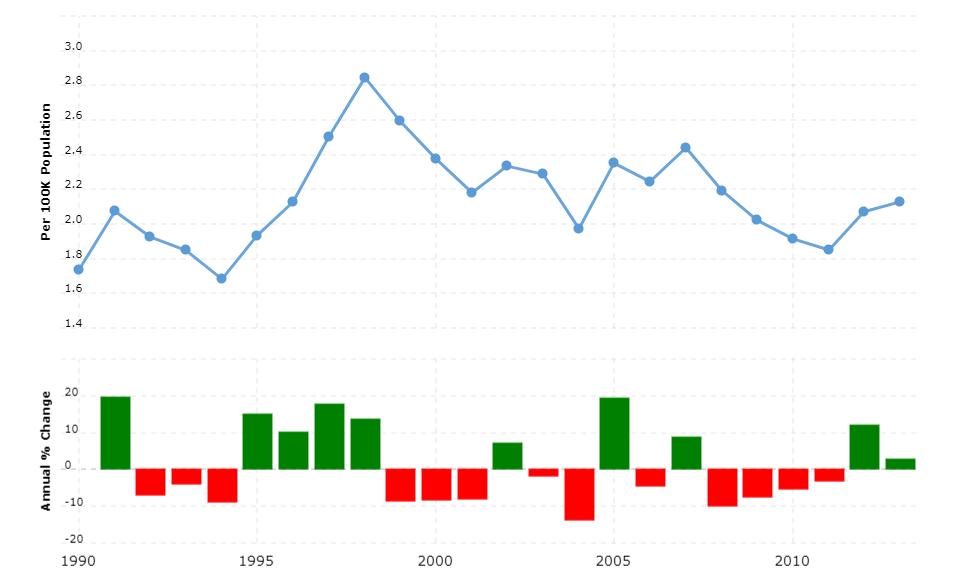