Abbreviated as MMR by Abbreviationfinder, Myanmar now has a civilian government and the last change of power in 2015 took place through a general election. However, the Constitution gives the armed forces great influence over politics. The military is accused of serious human rights violations, especially against minority people. Accusations have been made of genocide targeting the Muslim minority Rohingya.

Every fourth seat in the parliament is reserved for the military (tatmadaw), which also adds three central government ministerial posts. According to the constitution, Aung San Suu Kyi, chairman of the largest political party NLD, must not become president. But through a specially established post as national adviser (State Chancellor; State Counselor), she is in effect Myanmar’s actual civilian leader.

The military also has a kind of veto over constitutional amendments, as such must be approved by more than 75 percent of all members of parliament and the military automatically has 25 percent of the mandate. One-third of the members of the state and regional assemblies must be military.

In the event of a state of emergency, the conditions of which are not described in more detail, the commander-in-chief automatically assumes all legislative, executive and legal power.

A controversial clause in the constitution says that the president must not be married to a foreigner. It is considered tailor-made to prevent NLD leader Aung San Suu Kyi from becoming president. Her late husband was a British academic.

There are many political parties and free party formation prevails. Many voluntary organizations and associations can operate freely and openly, even those who were previously forced to work in exile. It still happens that people who engage in military-sensitive issues such as human rights violations, violations of freedom of expression or land rights are prosecuted.

In Myanmar, there are a number of conflicts between the central government and the military, and ethnic minorities on the other. In the context of these conflicts, the military is guilty of abuses against minority people, who in many cases feel discriminated against by the central government. Read more about the Rohingy situation and Conflicts with other minority people.

The whole Myanmar community is plagued by corruption and nepotism. Over the years, the military has gained great influence over the business community and the highest military leaders are well-off. The parts of the state budget relating to the military are not public. Myanmar was ranked 130th in Transparency International’s index of corruption in 180 of the world’s countries in 2019 (see the full list here). It was two investments better than the year before.

Myanmar’s media is partially controlled by the military or government. This is especially true of reporting from conflict areas where the military is active.

According to Reporters Without Borders , until the start of democratization in 2011, Myanmar was one of the five countries in the world where the mass media was least free. Foreign journalists were also subjected to rigorous scrutiny. Many were denied entry visas, equipment and film were confiscated and several arrested and expelled.

During the political thaw of 2011, conditions were softened. In August 2012, the preliminary censorship was abolished by printed publications. In April 2013, private companies were allowed to publish newspapers, which meant that a nearly 50-year-old state monopoly was abolished. That same spring, several privately owned newspapers saw the light of day.

In 2014, the media climate again hardened. Several journalists were arrested and charged for, among other things, illegal infringement and defamation. In some cases, harsh prison sentences were sentenced. The backlash for media freedom was interpreted as part of the regime’s attempt to quell the opposition ahead of the 2015 parliamentary elections.

Government control over the media has hardly diminished since Aung San Suu Kyi’s democratically elected NLD government took office in April 2016. One explanation for this may be that media freedom has not been a priority area for the government.

The self-censorship of the journalist corps continues to be widespread, especially in reporting on military operations. Media monitoring of violence in the state of Rakhine (see Current Policy) is strictly controlled by the military and the government. In September 2018, two Myanmar reporters were sentenced by Reuters news agency to seven years in prison for using classified material in connection with the disclosure of a massacre in Rakhine (see Calendar: December 2017, April 2018 and September 2018). After sharp criticism from the outside world, the two journalists were pardoned by the president in May 2019 and were able to leave the prison. In September 2018, a chronicler was also sentenced to the same sentence for posting “rude” posts about Aung San Suu Kyi on Facebook. The number of defamation lawsuits in connection with criticism of the government has increased in recent years.

A limited use of the internet was allowed in 2002, both in supervised Internet cafes and in private. At a price few could afford to pay, it was possible to visit domestic websites as well as a limited number of foreigners. The regime monitored e-mails and mobile calls, and blocked many Internet addresses and foreign e-mail accounts. Those who dared to defy the regime lived dangerously and could be sentenced to long prison terms. Exile Myanmar internet sites were sometimes knocked out by cyberattacks.

In September 2011, the Internet censorship was almost completely abandoned and internet usage has increased rapidly since then.

Reporters Without Borders ranked Myanmar in 139 of 180 countries in its index of freedom of the press in the world in 2020 (see full list here). It was about the same level as the last two years.

During the military junta until 2010, there were many reports of serious violations of human rights. They were committed by military, police and security forces and the victims were often advocates of democracy and people who engaged in or fought for the rights of ethnic minorities or for increased self-government.

The military junta abolished the civil justice system in 1988, but reinstated civil courts in 1992. Many judges, however, were former military. Trials against oppositions were usually held behind closed doors and without the prosecution having access to defense lawyers. The least criticism leveled against the junta could lead to multi-year prison sentences.

After the USDP government’s entry, the pressure eased against dissent. During the 2011 political thaw, hundreds of political prisoners were released, but a promise by then-President Thein Sein that all remaining political prisoners would be released in 2013 was probably not met. On the contrary, according to Amnesty International, new prisoners of conscience were added, including human rights activists, journalists and environmental activists.

The NLD began its reign in spring 2016 by releasing dozens of political prisoners and detained students. In 2017, Freedom House described the status of Myanmar’s political freedoms and rights as “partially free”. However, just a few months after the change of government, reports from the UN and human rights groups were mainly about the NLD government’s lack of ability – or disinterest – to stop military harassment, abuse, displacement and killing of Rohingy people in northern Rakhine as well as Muslims in other parts of the country. Amnesty International and the United Nations Human Rights Office (OHCHR) warned in the fall of 2016 that the abuses against Rohingyans could be considered as crimes against humanity. The UN Commissioner for Human Rights has described the expulsion of Rohingy people out of the country as a “textbook example of ethnic cleansing”. In September 2018 the UN recommended that the highest military officers should stand trial at the international tribunal for genocide in rohingyer in Rakhine (see Current policies, Rohingyernas situation and Calendar).

Reports also continued to come of abuse by the military against civilians in the states of Shan and Kachin in the north, where the fighting between the government army and ethnic rebel forces was intensified soon despite a national ceasefire agreement (NCA; see Conflicts with other ethnic minority people).

In addition, during the NLD government, reports have come that journalists and human rights activists are still being arrested on arbitrary grounds. 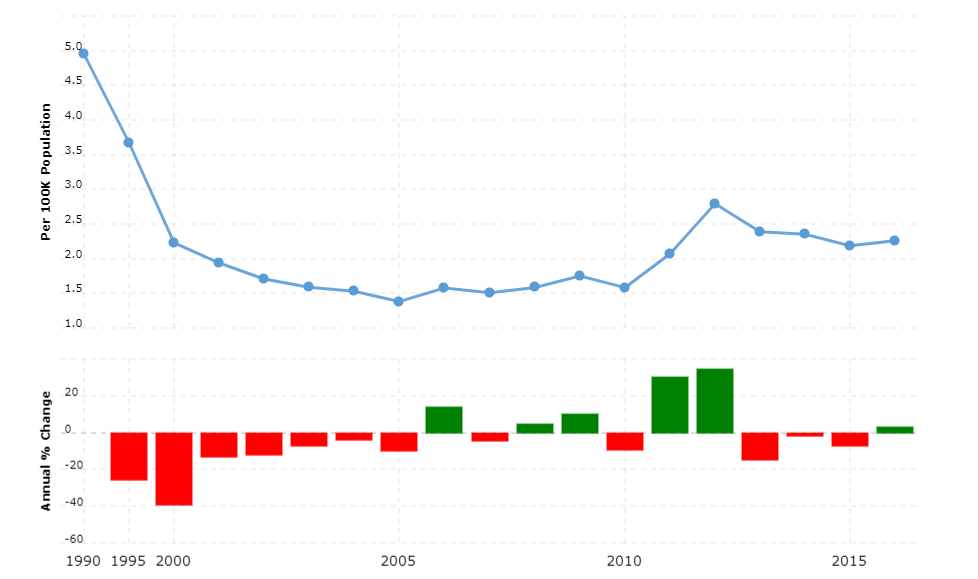