Abbreviated as AZE by Abbreviationfinder, Azerbaijan is a harsh dictatorship in which regime critics are persecuted and can be sentenced to long prison terms. Corruption is widespread.

None of the elections that have taken place in Azerbaijan since the 1990s have been approved by international election observers as free and fair (see Political system). At the same time, the regime’s systematic persecution of critics has led the opposition to remain weak with little opportunity to act. Detention and long prison sentences against regime critics have been criticized by the OSCE, by the Organization for Security and Cooperation in Europe, as well as by human rights organizations.

Following a criticized referendum in 2016, the constitution was amended to strengthen the power of President Ilham Aliyev (Əliyev) and his wife, Mehriban Aliyev, to be appointed vice president. At the same time, the freedom to hold meetings and demonstrate. Nowadays, only meetings that do not “interfere with public order and morality” are allowed. Demonstrations without permission from the authorities usually lead to police operations and detention.

Space for civil society organizations to operate is limited. Following a legislative change in 2014, demands are made for a complicated registration procedure without which it is impossible to open a bank account or enter into an agreement. Donors must have their project proposals approved and committed to “respecting Azerbaijani national and moral values.” In practice, almost all foreign funding has been withdrawn and several leading civil society actors have left the country. But neither are activists safe to operate abroad, as there are reports that family members who remain in the country have been pressured.

Women’s enjoyment of human rights is protected by legislation, but social and cultural norms are shrinking, especially in rural areas. 17 percent of MEPs were women in 2017. Azerbaijan was ranked 97th in the World Economic Forum’s Index of Gender Equality in 146 countries in 2018. Homosexuality is not a crime, but LGBTQs lack special protection in legislation and are often discriminated by as well as other authorities society.

In principle, religious freedom exists, but religious communities must be registered with the state. The legislation highlights tolerance for other faiths, while closely monitoring the activities of communities. In 2016, surveillance cameras were installed in all mosques.

President Aliyev has often been accused of exploiting his power to build up a large personal wealth. He has been identified as probably one of the most corrupt leaders in the world, with ownership interests in most profitable Azerbaijani companies. The widespread corruption within the power elite was exposed in 2017 in a major investigation by an international network of burgeoning journalists. It described how billions of euros were spent on bribing European politicians, lobbyists, journalists and businessmen (see Current Policy). Transparency International ranks Azerbaijan in 126th place in its index of perceived corruption in 180 countries in 2019 (see ranking list here).

According to the Constitution, the citizens of Azerbaijan should enjoy freedom of expression, but in practice it is not so. According to human rights organizations, monitoring of telephone calls and digital communications occurs. Anyone who criticizes the president or his circle is at risk.

In the last ten years, the attitude towards the media has hardened (see Mass Media). Defamation is prohibited and can result in up to three years in prison and fines. Disseminating information that could harm the President’s honor and dignity can give two years in prison. The authorities can close media that is condemned for slander and in 2017 a law was passed that also allows publications to be closed online, which previously served as a free zone for regime critics.

Defamation processes are used by the political elite as a way to punish individual journalists and stop regime-critical media. Misguided journalists have also been charged with a host of other crimes. According to the Committee for the Protection of Journalists, CPJ, ten journalists were jailed in December 2018 and several prominent journalists had been murdered.

Reporters Without Borders gives Azerbaijan bottom rating when it comes to freedom of the press. In 2020, Azerbaijan ranked 168th out of 180 countries surveyed in the organization’s annual review of press freedom in the world, see list here.

The independence of the judiciary has been questioned by heavy international actors, such as the Council of Europe. Corruption in the judiciary is considered widespread. There are regular reports that the judicial system is being used by the state power to approach regime critics. The criminal charges against these, as well as against critically investigative journalists, often apply to tax or other financial crime, smuggling, illegal weapons possession or drug crimes. Torture and ill-treatment of the arrested are common, as is fabricated evidence in trials. The detention times are long and a person can sit in detention for months without trial.

The case of opposition leader Ilgar Mammadov has attracted considerable attention. He was arrested in 2013 and sentenced to a seven-year prison sentence. The European Court of Human Rights ruled that the verdict is very likely politically motivated. In May 2019 Mammadov was released, but several other opposition politicians are still incarcerated.

The death penalty was abolished in 1998. 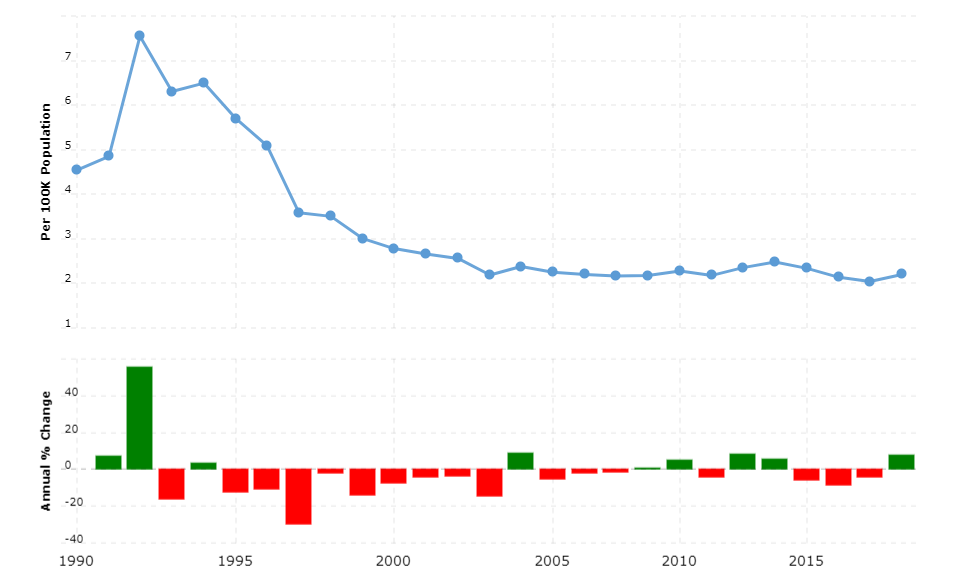